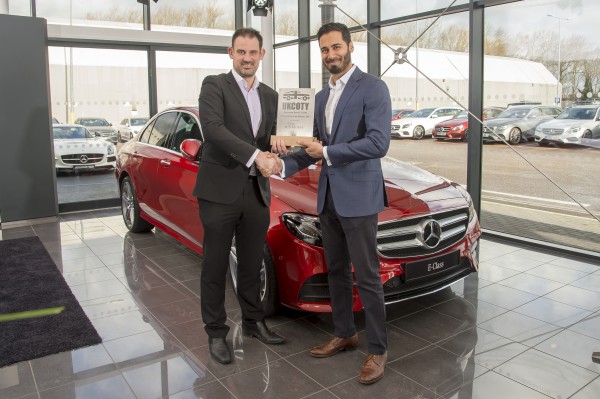 The new Mercedes-Benz E-Class has claimed the top honour at the UK Car of the Year Awards 2017, which are supported by Cox Automotive, whose UK brands include Manheim and Motors.co.uk. Having already been awarded the accolade of Best Executive Car when the category winners were announced at the beginning of January, the E-Class has added to the triumph by sealing victory in the overall vote. Further success for the German manufacturer came as its S-Class Cabriolet won the Best Cabriolet category.

“Mercedes-Benz has a long history of creating impressive saloon cars and the new  E-Class continues this trend and raises the bar in the executive vehicle sector. Stunning inside and out, it takes driver and passengers into the realms of luxury. The level of technology – and the attention to detail – at your fingertips is astounding,” said John Challen, director of the UK Car of the Year Awards. Fellow director, Alisdair Suttie, added: “The E-Class has it all and does it very well. Refinement, comfort and style that mean you want for nothing else.”

Commenting on Mercedes-Benz’s success in the UK Car of the Year Awards, Krishan Bodhani, head of smart and product management, Mercedes-Benz Cars UK, commented: “The E-Class is one of our core models; it’s at the very heart of our brand. When we unveiled the all-new car last year it showcased a host of innovative technology which makes it one of the most advanced cars in its segment. Together with its modern, comfortable cabin the E-Class presents a very desirable package – it’s great to see it getting the recognition it deserves.”

The UK Car of the Year jury were only too quick to highlight the E-Class’ strengths. Top Gear’s Tom Ford said: “The E-Class reigns supreme: endlessly entertaining interior, top-notch quality, comforting and comfortable dynamics”. David Ross, editor of HonestJohn.co.uk, added: “If you’re looking for a near perfect car – surely this is it. The E-Class is just sublime. Comfortable, quiet and quick – it’s a very easy car to love.”

Fleet World’s Alex Grant claimed the Mercedes was “a technological showcase”. “Beautifully built and a pleasure to drive, wherever your journey takes you, the  E-Class resets the executive class benchmarks,” he added. Finally, The Telegraph’s Paul Hudson concluded: “Class, comfort and quality with a good range of engines.”

In the overall category, the Mercedes-Benz E-Class triumphed over the Volvo V90 and Jaguar F-Pace which finished in joint second place, with Hyundai’s IONIQ and the Ford Focus RS in joint third.

Tom Callow, head of external communications at Cox Automotive UK, said: “We are proud to support the UK Car of the Year Awards, which through its independent and experienced judging panel, provides a highly credible verdict for consumers on the best cars on sale in the UK today.”

Launched in 2014, the UK Car of the Year Awards are judged by 27 of Britain’s most-read motoring journalists. Each judge uses their expertise to pick out the top performer in 12 vehicle categories, before deciding the overall winner from their favourites in each class. After a successful driving day in 2016, judges were once again given the opportunity to try out all of the category-winning cars at a media event hosted by Cox Automotive at its Manheim Bruntingthorpe facility in January.

Full list of UK Car of the Year Awards 2017 winners: