Sublime blend of technology and luxury

The latest edition of Mercedes-Benz’ flagship model. The new S-Class has sought to raise the bar in every area, and is designed to be as much of an experience in the back as it is from the driver’s seat. There are also now more options when it comes to  alternative powertrains, the S-Class featuring three hybrid models, including the S400 HYBRID.

Mercedes-Benz set out a target for the new S-Class to be “the best car in the world”, and given the wealth of technology on board, which passengers can enjoy in extreme comfort, the German manufacturer has done a pretty good job.

There are, of course, standard petrol and diesel engine options available, but the hybrid, with its claimed economy of nearly 45mpg is sure to be a hit with many customers, whether they are driving or being chauffeured.

The hybrid system is made up of a 3.5-litre V6 petrol unit alongside an electric motor, powered by a lithium-ion battery pack. This pack is compact than other Ni-MH hybrid batteries, but offers better performance, and, crucially, better fuel economy.

On the road, the system gets on with its task quietly and comfortably. The lack of a diesel engine hum – replaced by the silence of the stop-start system kicking in – is noticeable, especially in this class of vehicle. Given that mass-production hybrids have, until now, been much smaller vehicles, a large saloon’s engine cutting out may take some getting used to for a proportion of drivers, but it certainly doesn’t ruin the driving experience.

For such a big car, keeping body roll to a minimum is a welcome improvement in this sector. A race-car the S-Class is not, but with a sub-7 second zero to 62mph time, it certainly doesn’t hang around. For those looking to make even more rapid progress, there is always an S65 AMG model…

Inside the car, and occupants are spoiled for choice in terms creature comforts. Whether it is the seats that heat, cool or massage you, the dual-zone climate control with three different modes, or the Magic Body Control system that ‘reads’ the road ahead, the S-Class is all about keeping occupants happy.

There are more than 100 electric motors at work around a typical S-Class, powering many of the comfort features. A choice of seven different colours for the interior is a nice touch, and also goes that extra mile in keeping the customer happy.

Mercedes-Benz has seemingly left no stone unturned when it comes to giving drivers and passengers exactly what they want, in a vehicle that surpasses any other in terms of pure luxury.

Drivers may yearn to drive the S-Class, but passengers will not be disappointed, given the attention to detail that they find around them. If the S-Class is to be the best car in the world, it will take a big effort to take away that crown. 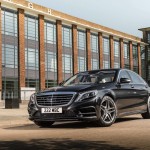 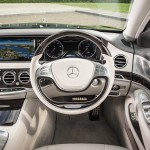 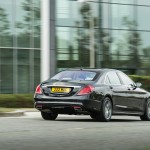 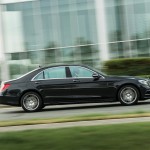 The fact that the S-Class feels as though it has been developed around the driver, with incredible attention to detail. That, combined with a great driving experience, is an impressive feat.

At more than 5m-long, some scenarios are crying out for a slightly smaller vehicle. Proof, then, that you cannot have it all.