The i3 is not BMW’s first foray into electric vehicles, but it is the first it has launch en masse to the public. The i3 also heralds a whole new sub-brand for BMW, which will be added to with the i8 supercar later in 2014.

The i3 may not be the first electric car on sale in the UK, but it’s certainly the most desirable.

The i3 comes in two models, one all-electric and the other a range-extender that has a small petrol engine to act as a generator to charge the battery. For short hops and city driving, the battery-only i3 is perfect. It offers zero emissions from the car, nips from 0-62mph in 7.2 seconds and drives in complete silence.

The i3 also drives just as you would expect a BMW to, so it handles deftly despite the narrow energy-saving tyres. A comfortable ride is also present and correct over the usual bump-battered roads of the UK and you should easily be able to cover 93 miles on a full charge of the battery pack.

Recharging is easy thanks to the plug-in socket that can be used with a normal household power socket or you can fast charge the battery with the more heavy duty points that are being installed in car parks. Make use of cheap overnight electricity and it should only cost a couple of quid to cover 90 miles.

For those driving longer distances, the i3 Range-Extender makes more sense. Its 647cc twin-cylinder petrol engine is borrowed from BMW’s motorcycle range and only cuts in when the battery’s charge drops below 75%. Even then, it only comes into play when necessary, so you could easily never have need of it for short journeys.

When the petrol engine does switch on, it’s only a very distant hum, but it opens out the i3’s practical driving range to 200 miles. The petrol-assisted i3 is a fraction slower from 0-62mph as it’s a little heavier, but it still drives with the same polish as the all-electric model.

Both i3 models share the same inviting and spacious cabin. There’s seating for four adults, a decent boot and the dash is a mix of familiar BMW dials and some futuristic touches to remind you this is a car with its eye on tomorrow’s world.

Tomorrow’s technology today means the i3 costs from £25,680, which includes a £5000 grant from the government for electric cars. That’s about the same as a Volkswagen Golf GTI or BMW 1 Series, but neither of those cars will be remembered as the one that defined 2014. That accolade goes to the BMW i3.

The BMW i3 is a massively desirable car, regardless of its means of propulsion, simply because of the way it drives, looks and the BMW badge on its snout. It’s also a very practical small car with plenty of space for four and luggage within its distinctive body. More importantly than anything else, though, the BMW i3 competes fairly and squarely with mainstream rivals such as the Audi A3 and Volkswagen Golf and bests them. 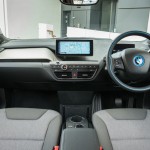 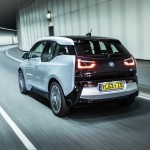 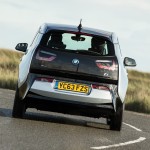 The i3’s low running costs, easy driving manners and superb handling. It also has nippy performance, image and practicality on its side.

For some, the pure electric i3 will not offer sufficient range for their driving needs, though BMW offers a range-extender to solve this.