Gearbox grates but the engine entertains

The latest in a long line of sporty Renault Clios. Since the Mk 1 Clio Williams in 1993, the French firm has wowed customers with performance versions of its supermini hatch. These Clios have always offered something different from the norm, such as the mid-engined, 227bhp V6, and this latest incarnation aims to follow the same strategy with an F1-inspired paddle gearshift.

Aficionados might not expect, let alone embrace, five doors and a sequential paddle-shift gearbox on their ultimate hot-hatch, but that is exactly what you get with the Renaultsport 200 Turbo EDC. The French company has decided to mix performance with practicality in a package, or at least a gearbox, that divides opinion.

EDC stands for Efficient Dual Clutch gearbox, and this component is the biggest talking point about the Clio RS. It’s the only transmission option and, while having a paddle-shift gearbox on a hot-hatch is one thing, the lack of a manual option could cost Renault.

The gear changes are smooth, but they are not the quickest, and the system comes across as a little tardy. In an attempt to maximise the ‘efficiency’ of the gearbox, the system encourages you to change up via a loud beep when you hit the redline. The delayed response in changing gear can be frustrating, especially when pressing on, and the change often comes when you least expect or want it.

For many buyers it will be a case of adapting to the characteristics of the ’box. Beyond its perceived limitations, it doesn’t prevent the rest of this Renaultsport Clio being a lot of fun. The engine is smooth and the 197bhp on tap are more than ample. That power is produced by a 1.6-litre engine, rather than the old 2.0-litre block. As a result of this change, buyers can expect an improvement in average fuel consumption of around 10% to a claimed 44.8mpg.

Three different driving modes are available: Normal, Sport and Race. Select either of the latter two and you get a true representation of how the car can perform at its extremes. Off goes traction control, the gearbox switches to manual-only (albeit with audiable reminders of when to change) and there is a distinct bark from the exhaust.

Sport mode is the comfortable middle ground with characteristics akin to how previous sport-focussed Clios behave. The ride is relatively stiff, but not uncomfortable, and there is plenty of steering feel to inspire confidence when cornering.

This is, however, a grown-up Renaultsport product, from the subtle exterior to Renault’s RLink onboard computer technology, which is easy to navigate and use. Whether that is a good or bad thing with the Clio faithful remains to be seen.

The gearbox divides opinion, with most suggesting the mere option of a manual would be a good idea. Whatever the reasons, there isn’t one and when you get beyond that fact, the Renaultsport Clio represents the new age of hot hatches: economical, yet still fun to drive. 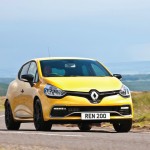 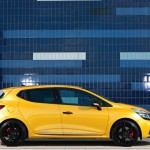 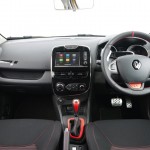 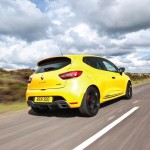 The engine is a joy and begs to be revved. Makes a great sound, too.

That gearbox. Given the option of a manual, it wouldn’t be so much of an issue, but as the only transmission? We’re not convinced