Hyundai’s latest supermini marks a big step forward in quality, standard and optional equipment, and interior space. It’s a competitive sector, which means the Korean company faces a challenge to stand out from the other major players.

The i10 is the latest car in the Hyundai range that seeks to re-position the company as one that produces desirable, well-built, and great value for money cars. Together with sister brand Kia, Hyundai is proving Korean cars can challenge the more established European and Japanese competition. As a result, it’s clear the i10 has been developed to battle the big European players in the market.

Build quality has been improved over the previous i10, with superior materials featuring throughout the cabin. The dials are clearly laid out and, while the instrument panel is relatively basic, it is clear and unfussy.

While city cars are, by nature, small, nowhere in the rule book does it say that occupants must feel like they are like are struggling for space. Fortunately, drivers of the i10 are unlikely to suffer is problem, as the Korean manufacturer’s latest small car has plenty of space in the front and back for adults, while the XXL boot can accommodate items such as a children’s buggy with relative ease.

Get behind the wheel and the little Hyundai continues to impress. The i10 is a joy to drive in town and is nimble enough to easily navigate through traffic and into plenty of parking spaces that would challenge some of its competitors. Light but well judged weight for the steering works with the suspension to produce a comfortable ride regardless of the speed.

Although designed for the trials and tribulations of the urban environment, the i10 is more than capable on A-roads and motorways, even if the acceleration from the 1.2-litre ‘Kappa’ engine doesn’t suggest so. Sure, it’s no performance hot hatch, but given that the resulting fuel economy is close to 60mpg, you’d not expect to be setting any ‘Ring records.

We prefer the three-cylinder 1.0-litre unit that has a typically throbby hum, though it is never harsh. It may be slower on paper than the larger engine, but it feels more peppy on the road to make it our choice of motor.

A credible alternative to established rivals, the i10 enables drama-free, economical progress to be made. Anyone looking to downsize to this sector should give serious consideration to the Hyundai, given the five–year warranty, as well as the overall driving experience. 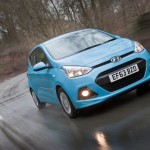 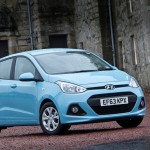 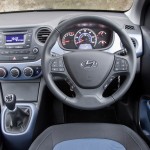 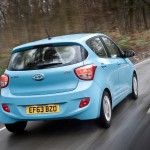 The ability to make the car feel spacious on the inside, while retaining the relatively small overall dimensions.

Steering-wheel mounted controls are all very well, but we managed to inadvertently hit the audio output button on more than one occasion. A design flaw, or just clumsy driver?