The best executive just gets better

The BMW 5 Series is the consummate large executive saloon and revisions to the engine line-up and a mild facelift keep it at the front of this hugely talented pack. Lower emissions make it even more appealing to company drivers and everyone will appreciate its sublime driving manners.

You might not think the BMW 5 Series needed any revisions, such was its superb all-round abilities, but BMW has found ways to make it better still. They include more efficient engines, which gets right to the heartland of BMW 5 Series buyers from business users.

The 184bhp 2-litre turbodiesel continues as the mainstay of the range and is at its best with the eight-speed automatic gearbox. Not only does the auto offer smooth shifts and a feel ideally suited to the Five, it’s also perfect for keeping carbon dioxide emissions at bay.

The 530d now offers lower CO2 output as well, dropping from the previous 149g/km to 134g/km, while the 518d dips below the 120g/km mark with its emissions of 119g/km to take advantage of the company car tax situation.

Much of the improved emissions comes from the introduction of a coasting function for the automatic gearbox. It works by disengaging the engine from the gearbox to reduce drag, while smoothed out aerodynamics let the BMW slip through the air more cleanly.

These changes all combine to make the 5 Series that bit better to drive in every circumstance. It rides superbly with either standard or sport suspension, though we prefer the standard set-up for its more composed and supple approach to bump-addled roads.

As ever with the 5 Series, it shows its rivals the way when it comes to steering precision and feel. It’s also impressively hushed inside the cabin no matter what engine is under the bonnet or the speed you’re travelling at.

The interior of the 5 Series is a cossetting place to spend time and BMW has seen fit to leave well alone here. There’s ample space front and rear and the only upgrades on offer are standard satellite navigation for all models.

Supportive front seats instil a connected feeling between the driver and the car. This lets you exploit the graceful balance of the BMW’s handling to the full and many will be surprised such a luxurious and cocooning car can turn in an instant into an amazingly competent sports saloon. This is what BMW’s 5 Series has been doing for generations and the latest is no exception.

A host of small changes keep the BMW 5 Series firmly at the front of the large executive saloon sector. It rides, handles and isolates exterior hubbub brilliantly, while lower emissions and a wider engine range only serve to make the BMW an even more compelling choice. 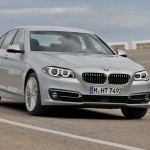 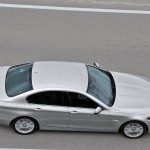 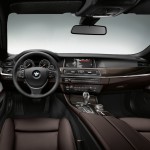 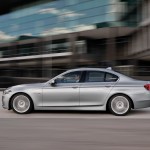 Refinement is a big plus for the 5 Series as it lets you arrive at journey’s end feeling relaxed and ready to do business.

The manual gearbox doesn’t have the same slick feel as we’d expect of BMW, so the automatic transmission is the best choice.