There’s definitely an ‘f’ in Jaguar now with the arrival of the swift, sleek and sexy F-type roadster. It’s a sports car from the same school of thought as the original Jaguar E-type, laying to rest a long harboured dream at the British firm to emulate the 1960s car’s success.

Attempts to replace the E-type by Jaguar have either been sporadic or misconceived until the arrival of the new F-type. Where the XJS was a grand tourer and the XK8 treads a fine line between sports and touring, the F-type is unashamedly a sports car in the mould of its illustrious ancestor.

There is nothing ill-judged about this car. Some may bicker over the styling being a little too close to the XK’s at the front or the boot being distinctly on the compact side of bijou, but there’s no denying its impact on the road. People stop, stare and point at an F-type in one of the more strident hues on offer, or you can choose a more subtle colour option and it’s the more knowledgeable enthusiast who will smile in your direction.

The biggest smile, though, is reserved for the F-type’s driver. A snug cabin offers plenty of space for arms, elbows and toes, with standard electric seat adjustment. The entry-point V6 has part-leather upholstery and we’d recommend paying the extra for the more supportive optional sport seats.

There are also some other choice options you need to add to the F-type to make it as desirable as the looks. Keyless entry and start is a wise choice, along with heated seats and metallic paint. It’s a shame the switchable sports exhaust is also an option as this helps complete the F-type experience with a suitable soundtrack.

The 3-litre V6 engine in both of these models is supercharged, pumping out 335- and 375bhp in the standard and S variants respectively. The F-type V6 knocks off 0-62mph in 5.3 seconds and hits 161mph. That should be more than enough for most drivers, but we’d recommend upgrading to the V6 S.

For the 375bhp V6 S, acceleration from rest to 62mph comes up in 4.9 seconds and top speed rises by 10mph. However, it’s not the performance that convinces us to choose this version but the ride quality. The V6 S has adaptive shock absorbers standard and they make all the difference to comfort at lower speeds. Where the V6 jinks and jolts over urban roads, the V6 S simply feels taut. Dial in more speed and the V6 S is simple more pliant and able to use its considerable turn of speed to better advantage.

More of a crackle to the exhaust note of the V6 S is merely an added bonus for those picking the more powerful of the V6-engined F-types. As for more practical needs, the S delivers 31.0mpg, only 0.4mpg behind the V6, while emissions of 209g/km for the V6 and 213 for the S are acceptable for this class of car.

Most F-type buyers won’t worry too much about economy. They will, however, think about the slick eight-speed automatic gearbox, stylish cabin and excellent build quality. They will also enjoy snug insulation from the fabric roof that folds quickly up or down, and they will love the Jaguar F-type for its looks. 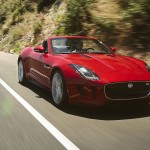 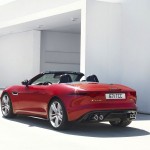 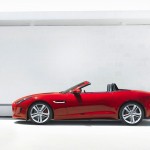 The V6 S is the most rounded Jaguar F-type and offers huge performance, as well as plenty of style and a great sound from the engine and exhaust. The F-type is great on twisty roads and is every inch the E-type’s true successor.

The low-speed ride comfort is acceptable in the more expensive models but too brittle in the V6. An entry-level F-type is expensive compared to many of its key rivals.