BMW’s third generation of its full-scale X5 SUV gets even bigger, better and a bit more parsimonious. While the luxury side of the X5 is taken care of by more standard equipment and the opportunity for more personalisation, the fundamentals of design mean it is now more efficient across the range. The ever-popular 30d model is significantly more economical, while a new 2-litre turbodiesel 25d model will be offered with rear-wheel drive only to deliver company car friendly 149g/km CO2 emissions and 50.4mpg average fuel consumption.

The X5 has steadily increased in size with successive generations, with the current X3 now only a smidgeon smaller than the original first gen X5. That first X5 broke new ground for BMW and the entire class, bringing genuine driving flair and enjoyment to a flourishing segment that previously could only muster wallowy handling and half-hearted off-road credentials.

Like the two X5 generations that have gone before, the third generation is not a serious off-roader and is aimed squarely at those who want a large luxury SUV that drives well on the road. However, BMW has obviously been stung by criticism about the X5’s rufty-tufty credentials as the new one comes with more off-road electrickery.

It means the X5 can handle a bit of unmade track and wet grass more ably than before. Given BMW drivers became the butt of many jokes and jibes during the past couple of winters, owners of the new X5 should feel more confident of getting to their destination. As an aside, BMW also reports it is selling around 10% of all new 3 Series with four-wheel drive, so the Bavarian company’s push to challenge Audi on this front is clearly working.

Back on the usual mix of British roads, the X5 deals admirably with the outrageous dings and furrows thrown in its direction. The suspension is taut and controlled, yet the M Sport model we tried did not buck or baulk in the way overly firm SUVs sometimes can. Even on the sizeable 20in alloy wheels of our test car, the ride was supple, comforting and in harmony with the road.

The same can be said of the excellent refinement of the X5. There is barely any wind or road noise audible in the cabin at higher speeds and we found conversation easy at typical motorway pace. Under hard acceleration, there is some giveaway diesel grrr, but in the case of the TwinPower Turbo six-cylinder engines it’s a satisfying six-cylinder burr rather than a grumble.

We’ve yet to try the X25d with its 2-litre four-cylinder turbodiesel, but from the evidence of the 3-litre turbodiesel models the X5 will have no problem mixing with the Porsche Cayenne and Range Rover Sport for performance or driver appeal.

Off the mark, the 3-litre diesel offers potent acceleration and the eight-speed automatic gearbox is as slick as the come. In manual override mode, the gearbox gives the X5 a sporty sensation and the Drive Dynamic Control system lets you further tailor the car’s behaviour.

Inside, the X5 has a cleaner look to its dash and dials, while the seats are supremely comfortable. There are three rows of seats, so seven can be conveyed in the X5, or you can carry five and have a large boot.

As for standard kit, the X5 is packed to the gunwales with opulence and safety. There’s a simple choice between SE or M Sport trims, with the sportier option coming with larger wheels and firmer suspension. Either way, the X5 is a hugely appealing car to drive.

BMW has judged the new X5 to perfection. It looks sufficiently new and enticing, yet reassuringly related to its predecessor, to keep the customers flowing into dealerships. More importantly, it’s better to drive, easier on the wallet and the new 2-litre turbodiesel engine will keep company funded buyers interested and Land Rover and Porsche worried. 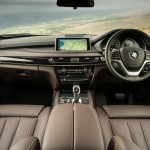 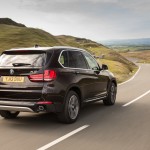 The way the latest X5 drives and its creamily punchy diesel engines. The new 2-litre diesel opens up the X5 to more company buyers.

The looks are still a bit challenging from some angles and, despite efforts by BMW, the X5 is a resolutely on-road focused SUV.